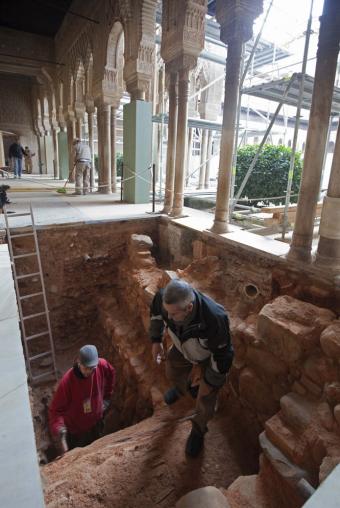 The Alhambra Palace is a fortress complex located in Granada, Spain that was constructed during the mid 14th century by Moorish leaders. It is one of the most famous palaces in the world.

A team of restorers have found 80 polychromatic (composed of various colors) drawings of animal and human figures hidden under wood and plaster in the Alhambra Palace. These types of images were strictly banned from Islamic art.

It is not the first time these forbidden paintings have been discovered; in 1959 some small paintings were found behind wood pieces that covered the ceiling in the Hall of the Ambassadors of the Comares Palace, Alhambra. At the time, little importance was given to the discovery and the workers assumed they were used to guide the artisans to fit the pieces together correctly.

However, a recent discover suggests that these finds are more important than originally thought. This time in the Lindaraja Viewpoint of the Alhambra Palaces workers discovered more paintings hidden beneath plaster and wood. The 80 drawings were done by artisans who worked decorating the Moorish Palace.

The Alhambra Palace is one of the most famous palaces in the world, and like many others, it has gone through many changes and restorations. These paintings represent something truly special because, since they have been hidden for centuries, they have been preserved in their original state. They are completely authentic and have not suffered from the humidity or other damaging elements throughout the centuries.

The drawings are very diversified and appear in the original colors. Animals, vegetation and fantasy creatures are clearly represented as well as verses from the Koran which are pending translation. 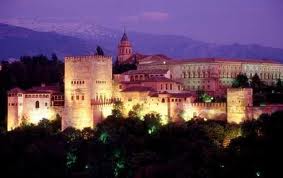 The human representations may explain why the workers chose to hide the drawings. At the time, human figures in Muslim art was strictly forbidden, so these graphical representations are not often found. The Koran states that it impossible to have an image of God and also suggests that no artist can compete with the divinity of the creation of real people. These suggestions greatly impacted Islamic art, to the extent that artists avoided the portrayal of human bodies (except for private rooms) and opted for geometrical designs that are common today. The Alhambra paintings were likely done completely in secret for fear of prosecution.
Besides the rare human representation, some of the drawings were even signed, something that is very strange in Muslim art. This may mean that person responsible for the designs may have had significant importance in the decoration of the Alhambra.

There are many mysteries surrounding the new discovery that are currently being investigated. It has been determined, however, that these drawings were in fact made by the same artisans that decorated the Alhambra Palace.

Perhaps these workers wanted to take a break from their grand geometrical paintings that decorated the Alhambra, and express themselves behind closed doors.
The director of the Patrimony reemphasized that the drawings were extremely valuable since they are in their original state.