If there's one sound associated with Spain, it's the dramatic melodies of flamenco. Read on and discover must-include spots for your flamenco tour in Spain. 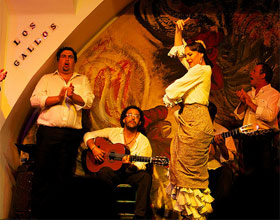 If you're in Andalusia's vibrant capital city, you've got to go to Los Gallos. Located just two minutes from Murillo Gardens, this is one of Seville's most famous and prestigious tablaos (flamenco venues).

Flamenco lovers won't want to miss the wonderful exhibits displayed at the city's Museo del baile flamenco (Flamenco Dance Museum). You'll find it on the street that bears its name, right next to the Giralda and the Cathedral. Another Seville flamenco hotspot is Puerta de Triana, a performance hall on Castilla street in the legendary Triana neighborhood, famous as a hub for flamenco activity. 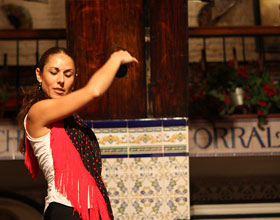 Spain's capital seems to absorb the country's most exciting cultural traditions, and flamenco is no exception. The city offers some of the oldest and most intimate venues for catching flamenco action.

The Corral de la Morería, included in The Michelin Guide and centrally located right next to the Plaza Mayor (on calle Morería), is one of Madrid's most historic tablaos. The famous Café de chinita sits in Madrid's historic district, between the Palacio Real de Madrid (the Royal Palace of Madrid) and the Gran Vía. Finally, the Corral de la Pacheca, near the Plaza de Castilla, rounds out a golden triangle of cante jondo (deep song). 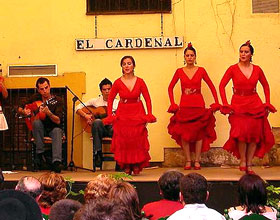 On the back side of the Plaza de la Corredera, La Bulería is another essential flamenco house, along with Rincón del cante at the Plaza de las Tendillas. 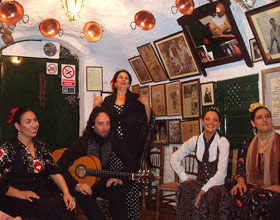 In the historic Arab district of Albaicín, Peña la Platería is Granada's most vibrant flamenco tablao, a place that's decidedly not designed for tourists, which always guarantees an authentic experience. 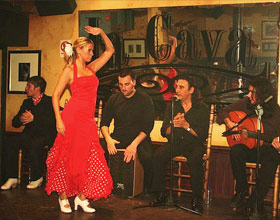 The lively cheer of this coastal city will invite you to lose your way in the old quarter, where the smooth sounds of guitar strumming and passionate singing guide you to La Cava, next to the Plaza de España. Here, you'll also find the Peña Flamenca de Enrique el Mellizo, named after one of Cadiz´s most historic and celebrated musical figures. This is where seasoned flamenco masters and new-comers alike offer memorable performances for the enjoyment of visitors as they savor the delicious
flavors of Cadiz cuisine. 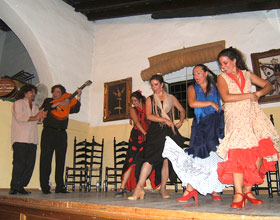 Considered by many as the home of the cante jondo, this is one of the world's most influential flamenco centers. Back dropped by elegant horses and the robust aromas of sherry wine, the city offers emblematic flamenco performance halls such as Peña la Bulería in the populated neighborhood of San Miguel, next to the Ermita de San Telmo. The sense of humor that characterizes the people of Cadiz is recalled in the name of another popular Jerez tablao: El lagá del Tío Parrilla (located just across from the Museum of Archeology), which offers the most spectacular dance shows imaginable. 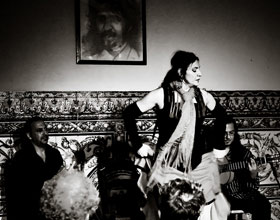 The Peña Juan Breva tablao sits huddled by the foot of the Gibralfaro Mountain, where it is cooed by the city's unique traditional melodies.

Its stage has witnessed some of the greatest flamenco performances ever. If you'd like to not only observe, but also participate in this high passion art form, you can always head to the Liceo Flamenco, between the Cathedral and Gibralfaro Castle, where you can visit the flamenco museum, taste wines from Malaga and take dance and guitar lessons. 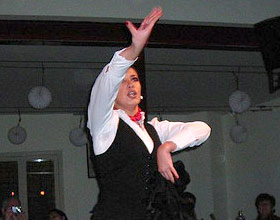 As a city that has historically received large amounts of people emigrating from Andalusia, Catalonia's capital is home to some of flamenco's most acclaimed artists. Right downtown on the Rambla, opposite the Teatre del Liceu (the cathedral of classical and opera music, you'll find the Tablao Flamenco Cordobés. Crossing the street you come across La Traviata a Sara Baras.

The legacy of Carmen Amaya, perhaps the greatest flamenco dancer in history, lives on at El Tablao de Carmen, located in the well-known Poble espanyol, on Montjuic. 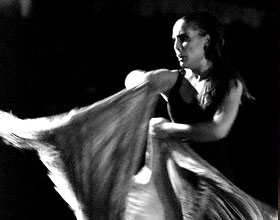 The Plaza Coca de la Piñera, next to the library, puts on a surprising program of flamenco shows nearly all year round.

The Peña el Cabrelillo, just behind town hall, is one of Andalusia's longest standing flamenco institutions, a place full of love, faithfulness and a passionate interest to safe guard el cante in its purest form. In the city of Ubeda, the Tablao casa-museo andalusí, next to the Parador, offers the unique opportunity to enjoy flamenco in a gorgeous building on calle Narváez. 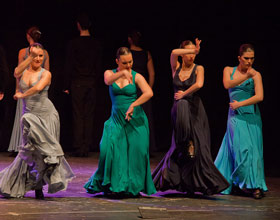 This city-province-autonomous community (all in one) has a special flamenco tradition, as demonstrated in the Festival de Cante de las minas, celebrated in La Unión on the last week in March. At this yearly festival, Spain's best flamenco singer is awarded flamenco's equivalent to the Oscar, known as la lámpara minera. In the city of Murcia, the historic Teatro Romea has been home to the Cumbre Flamenca de Murcia for the last twenty years, a symposium that gathers the most respected singers, guitar players and flamenco experts for a three week period to discuss the finer points of the art and to offer special performances.

We hope that after this quick tour you decide to include some of these cities on your own tour of Spain, where the magic of flamenco awaits to inspire you in true Spanish style.