In spring, nature is reborn and everything about it invites us to renew our ties with the planet. It’s a time that charges us with energy and prepares us for the splendor of summer.

We want to take you to ten landscapes that we think are inspiring, uplifting and full of positive energy: from the glaciers in southern Argentina to the Peaks of Europe, and the Arabic gardens in Granada to the rich history of the Alberca cave… This week we have a special route for you designed to highlight the beauty of Mother Nature and the marvels made by mankind as you renew your interest in living life in Spanish. Let us guide you through our list of TopTen inspiring places in Spanish speaking countries where you will find harmony, balance and beauty that you will never forget. 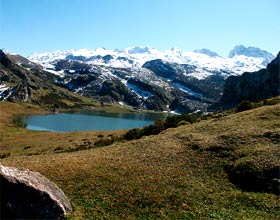 This majestic mountain range is located in the center of the Cantabrian Mountains in the northern part of the Iberian Peninsula between the Autonomous Communities of Asturias, Cantabria and Leon.

A favorite destination for Spanish climbers, El Naranjo de Bulnes is one of the most popular peaks and is often considered as the birthplace of the sport of rock climbing in Spain.

With over 64,000 hectares of unforgettable landscapes, we recommend the Picos de Europa to anyone who wants to get just a little closer to heaven, in all aspects. 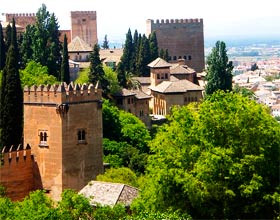 Located in Granada, the Spanish city where the splendor of the Muslim culture reached its highest levels.

The Generalife, a royal summer getaway hidden away behind the massive Alhambra Palace, is a haven of tranquility and balance with its sprawling gardens, beautiful buildings and paths that run throughout the complex. 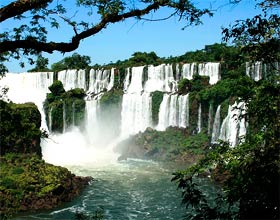 In the junction between Argentina and Brazil and very close to the Paraguay border are some of the most impressive natural falls imaginable.

With 275 different waterfalls, the roar of falling water can be heard from miles away. It is no surprise that this magical place has been recognized as one of the seven natural wonders of the world.

Iguazú National Park, located in both Argentina and Brazil, offers protection to this unique ecosystem that exemplifies the strength and power that Mother Nature hides within. 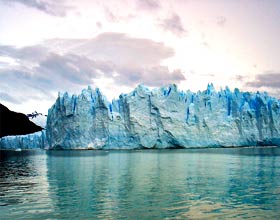 Located in Los Glaciares National Park on the southern tip of Patagonia, Argentina, near the town of El Calafate, is one of the world's most impressive glaciers.

This huge river of ice is five kilometers wide and reaches a height of over 60 meters above sea level, where massive icebergs break off of the huge glacier and produce intense sounds.

The location is in a privileged area of the world where one can observe whales and other cetaceans in one of the largest fresh water reserves on the planet. 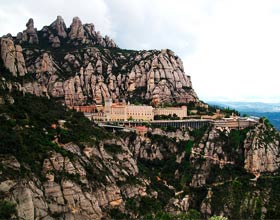 About 50 kilometers to the south of Barcelona we find a surprising place: the mountains of Montserrat (In Castilian, "Monte Serrado" due to the aspect that years of erosion have caused). It is the most representative mountain in Catalonia and home to a sacred monastery dedicated to the Virgin of Montserrat, a pilgrimage center of the Catalan people.

The Black Madonna (Moreneta), patron saint of Catalonia, is a Romanesque carving that, according to legend, miraculously appeared there in 880. When an attempt was made to move it from its place, it became so heavy that it was impossible to move. This seemed to prove to those who found it that it was the Virgen's will to stay there, where a chapel was built that would eventually evolve into the monastery that we see today. 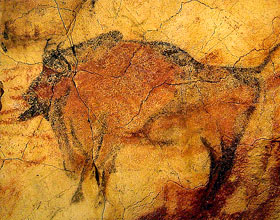 It showcases the most impressive cave art of the Upper Paleolithic period. Many have called Altamira "the Sistine Chapel of Prehistoric Art" due to its beauty, complexity and shear amount of pictures located inside. These prehistoric paintings inspire us to pay homage to our ancestors, an experience well worth the trip through the lovely landscapes of the Cantabrian town Santillana del Mar, where the cave is located.

Visit Altamira Cave and enjoy the harmony of these cave paintings, where you'll experience the memory of a primitive age through the artwork of its people. 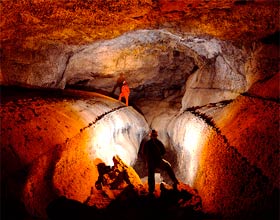 The On the volcanic island of Tenerife, near the city of Icod de los Vinos, we can find an impressive example of the telluric force of the volcanoes that formed the Canary archipelago.

The Wind Cave, over 17 kilometers long, is the longest lava tube in the European Union and the fourth in the world. Upon entering the interior of the volcano you observe Mother Nature's majestic engineering work, which makes you shudder as you imagine the roar of liquid lava that once passed through the very spot where you stand now in perfect silence, in the heart of the Teide, where the only melody heard is that of your breathing and your excitedly beating heart... 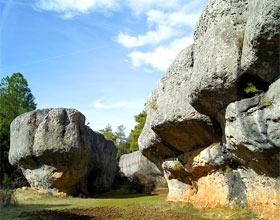 Near Valdecabras, in the province of Cuenca (Spain), at an elevation of about 1,500 meters is the location of our next site, the Enchanted City.

Carved out of the rocky ground from years of rain and wind erosion, these natural formationswere declared a Natural Site of National Interest in 1929.

The rock formations transport you to a magical landscape where anything is possible and your imagination finds hidden animals and monsters within the rocky shapes.

It is here, next to the Tormo Alto formation that is the symbol of the city, that Viriatus, the Spanish leader of the resistance against Roman rule, was cremated. 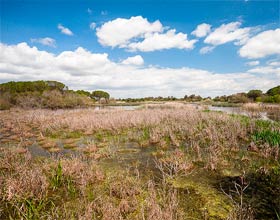 This natural park extends nearly 105,000 hectares, occupying parts of the provinces of Huelva, Seville and Cadiz. The name originated from the name "Doña" (Mrs.) Ana de Silva, wife of the seventh Duke of Medina Sidonia, original owner of the land which he used as private hunting grounds. The natural enclave is home to marshes and dunes, an important stopping point in European bird migration to and from Africa in the winter and spring.


In the village of Almonte, the event attracts more than a million pilgrims each year as they converge upon the village from various different controlled routes to pay homage to the Virgin of El Rocío.

The Peña el Cabrelillo, just behind town hall, is one of Andalusia's longest standing flamenco institutions, a place full of love, faithfulness and a passionate interest to safe guard el cante in its purest form. In the city of Ubeda, the Tablao casa-museo andalusí, next to the Parador, offers the unique opportunity to enjoy flamenco in a gorgeous building on calle Narváez. 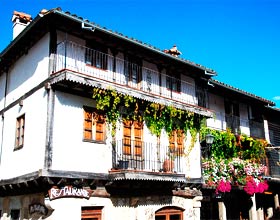 In a busy world of Internet and globalization in which being in a hurry has become a normal part of life for most of us, La Alberca, located in the northern part of the province of Salamanca, is a peaceful haven of history where traditions have been carefully preserved.

The village feels like a living museum with its unique architecture.

Surrounded by thick impressive forests, the village is like an island of peace that makes visiting it a must for anyone who finds themselves in the proximity of Salamanca.