They’re here, they’ve already started, and as all of Spain looks to the coast, Valencia is fully in the throes of its famous and enthralling festivities- the Fallas!

From the end of February to the 19th of March, you can live Valencia’s most typical celebration. It’s their biggest, the one that everyone dreams of visiting at least once in their lifetime, Las Fallas.

Tradition tells us that Saint Joseph is the patron saint of carpenters. Therefore, in the 18th century, all the carpenters in the city met in the plazas on the eve of March 19, the day on which Saint Joseph is celebrated, to make an offering. And what was this offering? They would burn tools and scraps of wood that had been used during the winter, in order to summon good luck.

And this modest event grew and grew into what we see today as the spectacular and grand celebration of Las Fallas.

Therefore, today we’re bringing you a basic guide of what you can see each day at the festivities.

La Plantá. There have already been concerts, contests and other festivities throughout the city’s plazas, but the Plantá signals the official kick-off of the week’s celebrations. 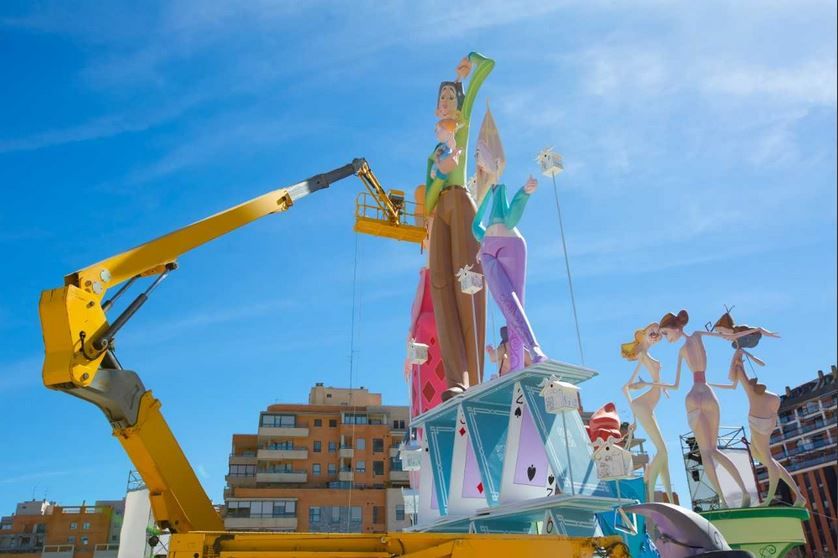 Throughout the year, the great Falla artists have been busy in their workshops creating their astounding monuments. And it is during the Plantá that all this art comes out and into the light. These sculptural works are set up in the plazas so that everyone can enjoy them for a few days and vote for the best one.

In addition, every day there is a different mascletà (a traditional, powerful fireworks’ display) in the Plaza del Ayuntamiento (Plaza of the City Hall). But what exactly are these mascletàs? Noise. Thunderous noise, and LOTS of it! They are strategically placed firecrackers that sound slowly at first, but get faster and faster as the explosions progress. This results in a deafening show that shakes the ground with each detonation. 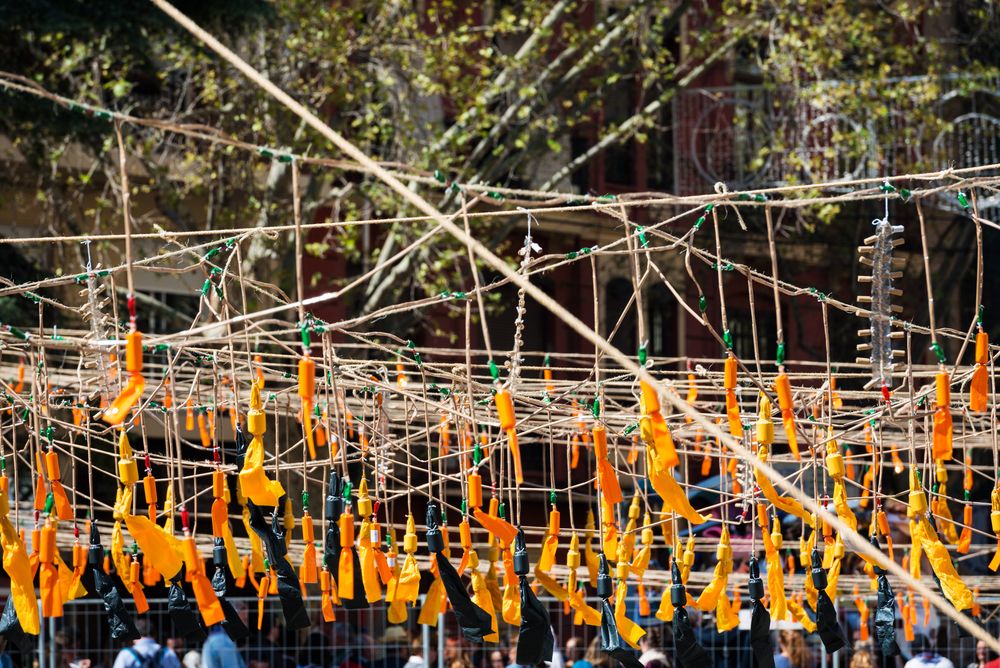 In addition to the daily mascletà in the Plaza del Ayuntamiento, the weekend also celebrates a colorful floral offering to the Virgen de los Desamparados (the Virgin of the Defenseless). So if you see people in the street with bouquets of roses or the image of a Virgin with a mantle full of flowers, there is no need to be scared. It is part of the tradition.

After midnight, the Valencian sky fills with a symphony of gunpowder, lights, colors and sounds... The Castle of Fireworks display has started. A true wonder to behold.

This day will have a more cultural touch than the rest.

Two of the city’s historical figures receive their tribute every year, so that the tradition continues from generation to generation.

One of them is the poet Maximilià Thous. Among many other things, he is distinguished for putting lyrics to the official anthem of Valencia at the beginning of the 20th century. And the other historical figure is the composer Maestro Jose Serrano. He is known for having penned, among many works, the hymn to the Virgen de los Desemparados, the patron saint of Valencia whose image is yearly regaled with flowers.

But Sunday is not yet over. Adding to the mascletà and the offerings in the streets, this is the Nic del Foc, the Night of Fire. 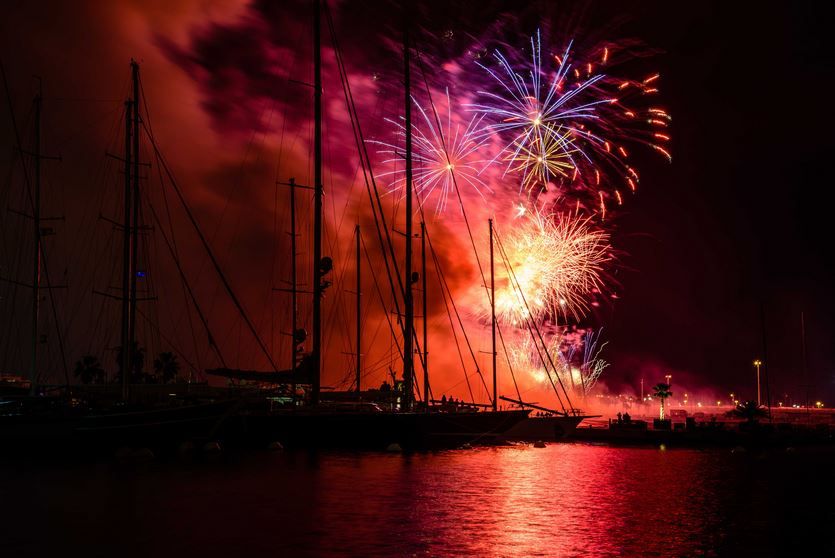 Being the spectacle to top them all, this is the night where Valencia’s night sky attracts the most onlookers. More than half a million people come together every year to enjoy this display of pyrotechnic and digital art. It's no use reading a lot about this night, you just have to live it.

On March 19, the day of San José is celebrated and, following tradition, it is Valencia’s special day, par excellence.

Las Falleras Mayores de Valencia, the 2 yearly elected queens of the celebrations, make a floral offering to the Virgen de los Desamparados. Beyond the offering itself, it is worth seeing because of the women's beautifully intricate traditional outfits, the typical music and for the festive atmosphere that swells in the streets on this day. 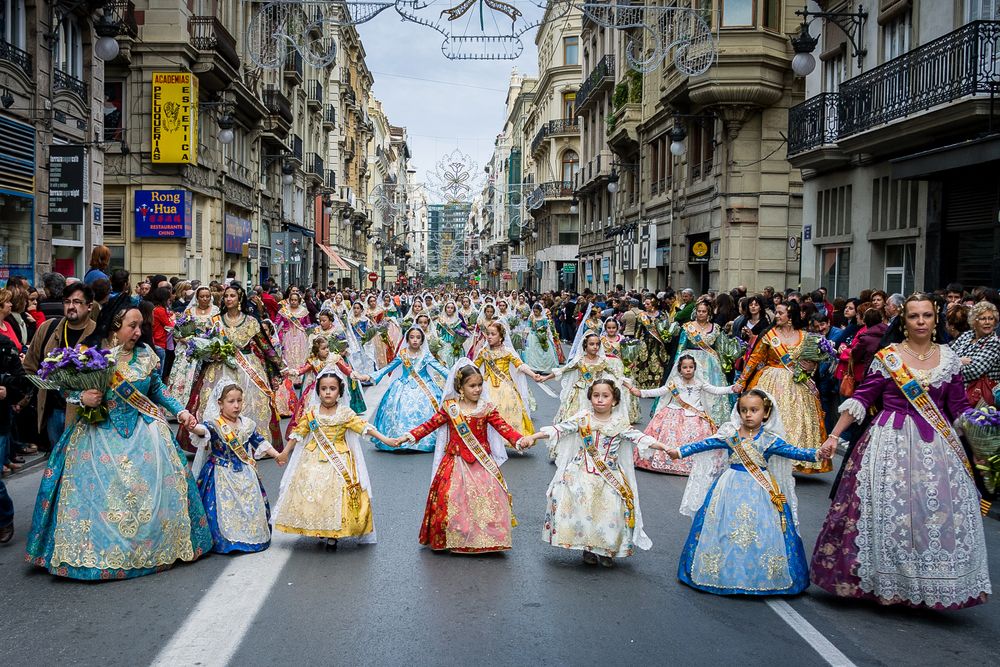 In addition to the daily mascletà, on March 19 there are two unique events: the Cabalgata del Foc and the Cremà.

The Cabalgata del Foc is a spectacular parade through the most important streets of the city where the protagonist is fire. It is a truly impressive pyrotechnical display. There are floats, enormous machines, music... and fire, a lot of fire.

But the parade is not only about its own spectacle. It is the announcement that Cremà, the moment everyone has been waiting for, is about to arrive. When midnight comes, only the Falla sculpture that received the most votes is saved from a fiery end.

All the rest, every last one, will burn into the night until they are reduced to ashes. After this, all that remains is to sweep up the dust, return to the workshops, and start the process of building next year’s Falla monuments once again. 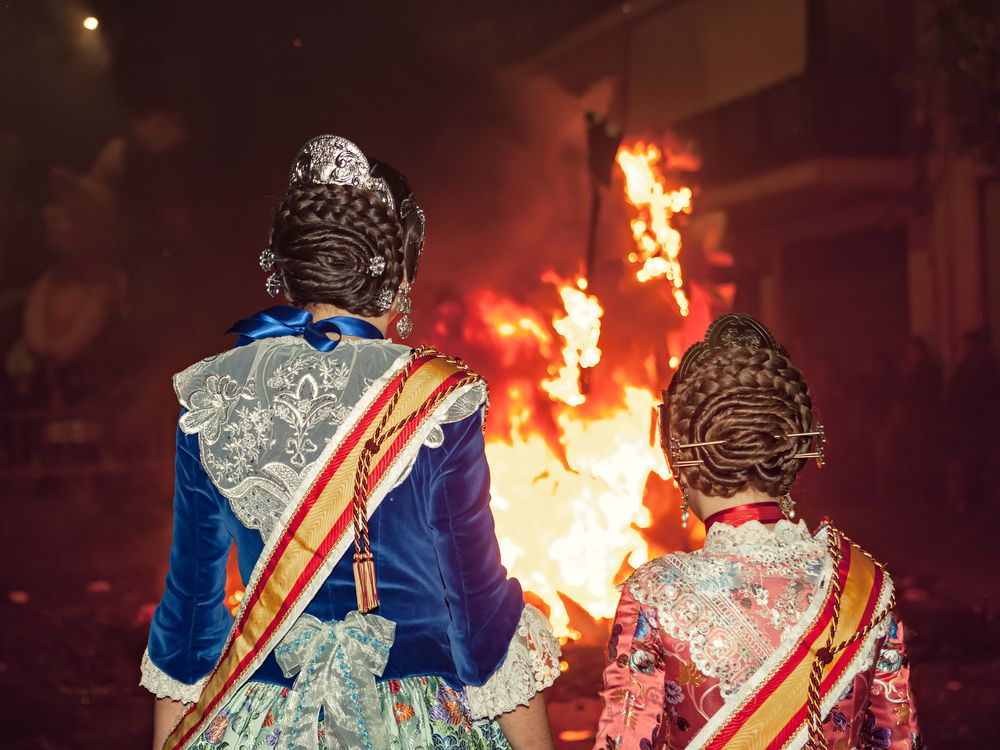