How to Sound like a Spaniard in 5 Easy Steps

All is well and good with speaking real proper Spanish. That’s true of any language. But what happens when you get out into the street in Madrid and suddenly you can’t understand a word anyone is saying because the Spanish they’re using is as far from text-book Spanish as you can get. Or maybe you’re Spanish is so good that you could pass for a native… almost… if only you could only drop those little giveaways that let everyone know you’re a foreigner and add some authentic Spanish tricks to your repertoire. Check out this list of little nuances (well, actually, some of them aren’t really so nuanced) you’ll need to know if you want to sound like a true Spaniard.

1. Don’t be afraid to put your tongue between your teeth (and other key pronunciation tricks in Spain):

These are all a little tricky – different aspects of them for people from different countries and native languages (one of these pronunciation keys is actually considered a speech impediment in the English language for example). So let’s jump right in.

“D”s sound like “TH” – Yep it’s true (even if it is sort of subtle). You won’t find one madrileño out there who doesn’t say something that sounds similar to “MaTHriZ” (although the “Z” sound at the end sometimes drops off and is not enunciated very clearly) or “MaTHri” (without the last D at all), when they’re saying what you or I might call “MaDriD.” The “D” sound in Spain is never a hard “D” like it is in English, it is a softer, subtler sound.

“C”s and “Z”s sounds like “TH” – When “C”s sound like “S”s in Spanish (that is to say when they come after an “e” or an “i”) they are pronounced as “TH”; the same goes for “Z”s (this is known as distinción, or distinction, in linguistics). This one is a real toughie for native English speakers – no, not all Spaniards have a speech impediment – this lisp sound is actually on purpose. So if you want to sound like a real Spaniard get used to going to “THaragoTHa” (instead of “Zaragoza”) and asking for a “THerBeTHa” (instead of a “Cerveza”) at the bar (note: the “V” sound is a cross between the “V” and “B” in Spanish – it falls somewhere in the middle).

The “-ADO” suffix sounds like “-OW” – You may wonder what a “hela-OW” is when what you’ve learned to ask for in Spanish class is a “hel-ADO” (an ice-cream). But get used to it. This is a relaxation of correct pronunciation that is omnipresent in Spain. And if you’re not aware that this is a common way to sling together the very common “–ADO” suffix you may get hung up when trying to understand just about everyone in Spain (and some in Latin America too).

If you ever listen to Spaniards speaking on the phone you’ll have heard them say, “vale, vale, vale” about a million times. You may try to make sense of the word, but if you’ve never been taught this most basic word in previous Spanish classes, it will be quite difficult. In reality it couldn’t be simpler. It simply means “ok.” Once you get used to it, you’ll see this one really rolls off the tongue, and is particularly sounds nice in threes: “vale, vale, vale.”  This is a must to pass as a true Spaniard; “OK,” just won’t do on the Iberian Peninsula (although everyone there will understand what it means). ¿Vale?

In other languages swear words are usually considered vulgar and used with care (at least in settings like the work place or at the university). Not in Spain however. No need to hold ‘em in here; let those four letters fly. There are a few words in Spanish that can be translated to truly offensive swears in English, but which have become completely innocuous in Spain. The best example is “joder” (which translates to F*** in English) one of the rudest and most shocking of words in English. In Spain, however, it is just another way to punctuate a sentence. We won’t go so far as to say it is used in very formal settings, because it is not, but hearing people calmly add “joder” to the beginning, middle or end of a sentence on a lunch date or in an office meeting certainly wouldn’t raise any eyebrows here.

Looking for more naughty words that aren’t so naughty in Spain? Try out “La madre que lo parió," more or less “damn” or “what the hell” to express surprise; "Cabrón," more or less “bastard” or “asshole” but again, can be used in a completely inoffensive way; or "Gilipollas," also translated to “asshole” more or less. But the list goes on and on…

Other markers are also used very commonly in colloquial speech in Spain. Although they are not swears you’ll hear just about all young people talking to friends punctuate with “tío” or “tía” (literally “uncle” and “aunt” but used in Spain as an American would use “man” or “dude”); “chaval” (“little guy”/“kid”) or “coleguis” (“friend”/“buddy”).

¡So get to it chaval, joder!

4. Use diminutives and augmentatives.

You’ll probably have heard the use of the diminutive suffix “-ITA” to make Spanish words small and cute. But what about “-ICO/-ICA” “-INO-/INA” “-ETE/-ETA” or “ÍN/-IÑA”? All of these different regional uses of the diminutive accomplish the same thing: “pequeñito” (small, little thing) is the same as “pequeñino,” “pequeñete,” and “pequeñín.” And if you want to make something extra-large, add an augmentative like a good Spaniard would: “-AZO/-AZA,” “-ÓN/-ONA,” “-OTE/-OTA,” “-UDO/-UDA.” Go from being “grande” when you speak Spanish to “un grandote,” drink an enormous “copazo,” or go home to your really nice “casona.” 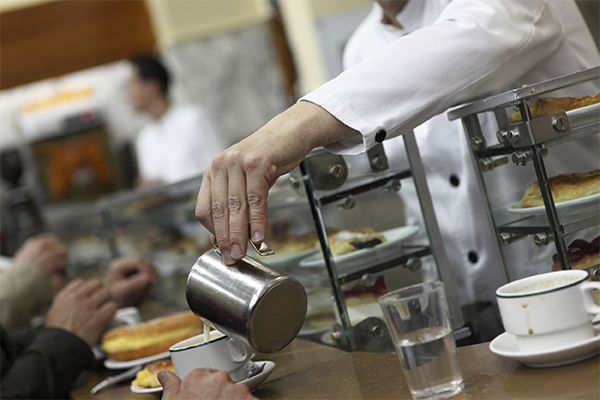 The way Spanish people order at bars, or make simple requests can be a little shocking for people from other countries at times. It can be hard to jump right in like a Spaniard and yell to the bartender “ponme un café” (literally “give me a coffee”). In a lot of cultures this would be rude, but no worries, it’s not in Spain! It’s just the way you order (that goes for beer, bread, or really anything else you get standing at a counter). You may feel temped to timidly ask, “¿Me pondrías un café, por favor?” (“Could I have coffee please?”) and although the barkeep will understand you, he may find it strange or you could even come off as a little condescending or sarcastic, as if you’ve been waiting for long time, since this overtly polite manner is simply not the cultural norm. Orders are also given in many other contexts (such as at the dinner table, in the street and in other service sectors). So don’t worry and order away, if you feel rude, just make sure to punctuate with a big smile!

Put these five easy steps into practice and you’ll be speaking like a Spaniard in no time. Better yet, come to Spain, experience them all for yourself and blend right in as just another español in the crowd.