February 14 is approaching. At don Quijote, we want to wish you a happy Valentine's Day. One of the most tragic love stories of the Spanish culture is the one about “The Legend of Teruel Lovers”. It is a medieval origin story that represents the idea pure love, a love that endures, especially in our artistic and cultural imaginary, beyond death and despite the passing of centuries.

You may have heard a Spanish saying that says: “Los amantes de Teruel, tonta ella y tonto él” ("Teruel lovers, silly her and silly him"). It is a phrase that comes from the Middle Ages, a saying that was used as a mockery to make fun of tragic love. But ... do you know about the legend that has been transmitted from generation to generation?

Continue reading this article in English or switch to the Spanish version to improve your Spanish skills.

The Legend of the Lovers of Teruel tells the love story between two young turolenses (people from Teruel) - named Isabel de Segura and Diego de Marcilla. This story ended up embedded in our folklore thanks to the many and varied interpretations carried out by important Spanish writers and composers. In addition, since 1996, a theatrical recreation of “Las Bodas de Isabel de Segura” takes place in Teruel, which is represented annually during the month of February in that Aragonese town. This event was declared as a Festival of National Tourist Interest in 2016.

Once upon a time, a rich merchant named Pedro de Segura who lived in Teruel during the thirteenth century. This merchant had a very beautiful daughter, named Isabel de Segura. Isabel met a humble but honest boy named Diego de Marcilla. Diego was the son of a family that, despite being once important and wealthy, had lost his social and economic position in recent years.

Both fell deeply in love, and, some years later, Diego ended up asking Isabel to marry him. Isabel said yes: she wanted to be his wife but would never do it without her parents' consent. However, despite being Diego Marcilla a handsome young man, he did not own land or wealth. But he was dying of love for her, and was willing to wait and seek fortune where he could. With this idea, he asked his beloved to wait five years, when he would be worthy of his marriage. Isabel promised him to wait, and Don Pedro de Segura also accepted the deal. Demonstrating his arrest and bravery, Diego marches into battle in the hope of getting the necessary wealth. After five years fighting the Arabs in the Reconquest, he returned with great riches, enough to offer his wife a prosperous future.

However, Don Pedro de Segura - father of Isabel de Segura - pressed his daughter to get married as soon as possible. She managed to delay the wedding with the excuse of keeping the promise of maintaining her virginity until she was 20 years old. But after five years, Diego de Marcilla showed no signs of life, and Isabel began to lose hope and think that her beloved had died in combat. Don Pedro hastened the wedding with a rich suitor. But on the same day of the wedding ceremony, Diego de Marcilla, who had suffered all kinds of setbacks, returned from the war.

That night, Diego managed to sneak into the bedroom of the newlyweds while they were sleeping, and woke up his beloved sweetly by saying "Kiss me, I'm dying" to which Isabel de Segura responded painfully “For the love of Christ, I beg you to find another, and forget about me. If our love could not please God, then neither should it please me”. But he was not willing to give up and, vehemently, insisted "Kiss me, I'm dying", and she replied again "I don't want to." At that moment, Diego de Marcilla fell dead before Isabel's eyes.

Isabel, shaken to see Diego dead for not receiving the kiss, woke up her husband and confessed. He replied:  "Oh, you wretched! Why did you not kiss him?" "To not deceive my husband", she replied. " "Of course, you are a woman worthy of praise”. Then, Isabel, feeling guilty for being the cause of the tragic event, went to meet him and kiss him before he was buried, hurrying to the church of San Pedro, where women were having a wake for the deceased. Isabel turned away the shroud to undress Diego de Marcilla's face and kissed him with such love and passion that she died on the body of his beloved. Legend has it that neighbors agreed to bury them in the same place, and there, in the Tomb of The Lovers of Teruel, they are lying together for all eternity. 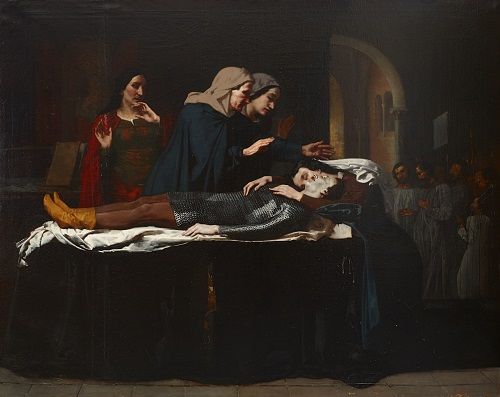